What is in Elon Musk's portfolio? 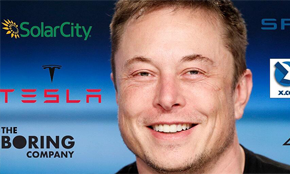 Between 2020 and today, Elon Musk went from not making the top ten richest to being the richest man in the world--with a current wealth estimated by Forbes at $271.3 billion and the wealthiest person ever. So, how did he get to the top, and what does he hold that has made him so much wealth? We’ll take a look at how this wealth was formed and what are his primary holdings.

Elon Musk's primary wealth generation is through companies he founded; however, part of his fortune also comes from passive investments. His five largest and best investments are companies that he founded, PayPal, Tesla, SpaceX, DeepMind Technologies, and The Boring Company. Musk also holds investments in several passive projects, such as payment processor Stripe, and cryptocurrencies that have produced a lot of his wealth; with a single tweet, he can cause huge swings in their values.

PayPal and X.com started it all

Musk co-founded X.com in 1999, a financial services company that allowed email payments. X.com merged with Confinity and was renamed PayPal in 2001. eBay purchased PayPal in 2002 for $1.5 billion, with Musk holding 11.7% and selling all of his stake in the company, netting him $175 million. He used his proceeds to fund future investments(Tesla, SpaceX, SolarCity).

Though not a founding member, Musk was an early fancier in 2004 and took over the CEO position in 2008 after being a long-standing board member. Tesla IPO'd in 2010 with shares selling for $17 each. They are now trading at over $800.

The company has created several cars (Model S, X, 3, and Roadster) and vehicles (including an all-electric Semi truck and a pickup). They are in the pipeline garnering lots of attention from Musk fans, and they have obtained pre-orders from the USPS and Pepsi, but buyers have been waiting for five years.

Musk owns 177 million shares of Tesla, giving him over $141.6 billion and more than half of his wealth.

Before he was involved with Tesla, Musk started SpaceX in 2002 to develop spacecraft for exploration to Mars and beyond. In 2006 SpaceX was awarded a NASA contract and has been sending supplies to the ISS since 2010, and after a second contract in 2012 shuttling crew members. In 2008 Musk was both the CEO for SpaceX and Tesla at the same time. A third NASA contract in 2021 for $2.9billion will transport humans to the surface of the moon. In Feb 2021, SpaceX had a private market valuation of $71 billion, making it a top-five aerospace-defence franchise, of which Musk owns 48%. Under SpaceX is Starlink, a space-based internet service; when SpaceX was valued at $50 billion(in 2020), Starlink had the majority of this at $42 billion. Musk has also Tweeted that long-term Tesla shareholders might get priority stock allocations from a Starlink IPO.

Musk was an angel investor in the Artificial Intelligence company, DeepMind in 2010, which was sold to Google in 2014. Because the purchase price was undisclosed, it is hard to tell what Musk made from the deal.

One of Musk's more recent companies was founded in 2017 for tunnel construction and infrastructure (the hyperloop being the most famous spinoff). Boring's biggest claim to fame project is the Las Vegas Convention Center Loop that travels under the city, going to 3 stations, and opened in 2021. Boring is presently working on a second Las Vegas project.

Musk has stated that he owns Bitcoin, Ethereum, and Dogecoin, and of this, Bitcoin is the largest percentage of his cryptos. He has also stated these three are the only cryptos in which he is invested. He has allowed some Tesla purchases to be made with these currencies, which Tesla also owns to varying degrees, causing their values and his own wealth to go up.

Many of Musk's investments have synergies between them. He started the solar company SolarCity which has merged with Tesla. It produces rooftop solar systems that are meant to charge the Tesla Cars and battery walls to move homes off the grid, the merger was said to produce $150 million in savings. But it goes deeper than this, SpaceX has purchased $255 million in SolarCity Bonds as investments. SolarCity's business requires upfront cash to fund its activities, while SpaceX has chunky cash balances from funding rounds and their NASA deals. This system means that SpaceX gets a good yield, and SolarCity has cash flow. Musk also holds $65million in SolarCity bonds.

The current world's richest man has made his fortune by going all-in on businesses and then tying them together with his other holdings, making them a stronger whole than the sum of the parts. Musk now has a bully pulpit that can create even more wealth, and uses his position to do so. This would be a problematic model for another investor to follow because of the notoriety and wealth behind it. Still, investors can watch his moves and follow as much as possible.

To stay up to date with where the world’s wealthiest people are investing their money, subscribe to stocktips.market and tradelikebuffett.com.