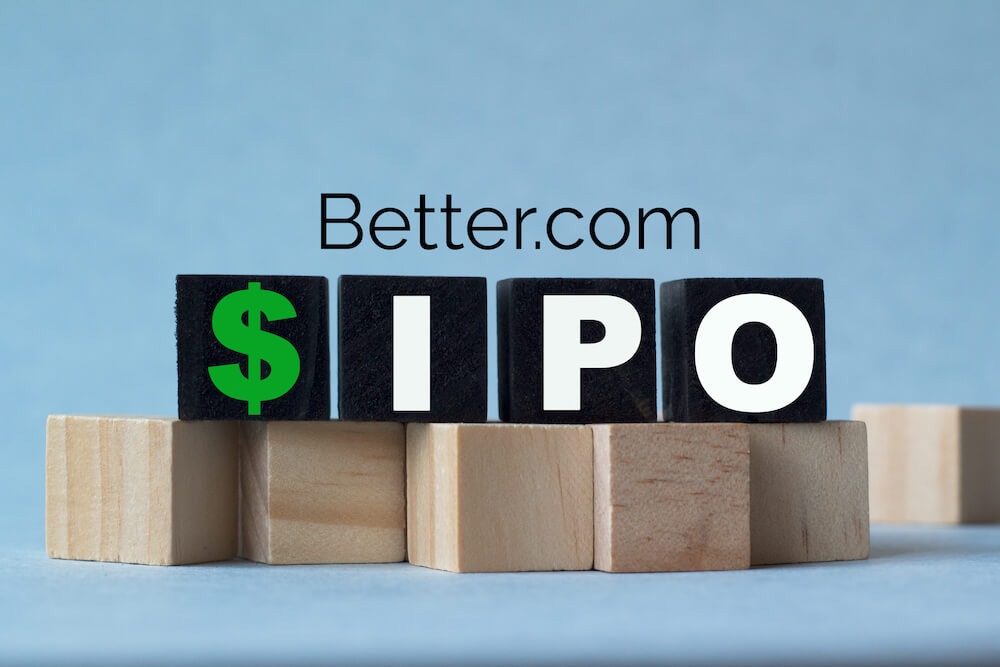 When is the better.com IPO?

While mortgage rates were low, housing demand remained high through the pandemic, and Americans reconsidered their work-life balance, buying homes in record numbers; Better.com first considered going public, but this was stalled. Are they too late to ride the best wave?

Better.com was created five years ago as a startup with fantastic growth since, taking advantage of the low-interest rate environment and housing frenzy built since the end of the great recession. Better has streamlined the process of buying a home at the right time, pushing fees and commissions to zero, which let it do billions in mortgage originations and insurance sales.

There is still market uncertainty, with the biggest player, Rocket Mortgage, chugging along. Better.com’s impressive tech may not be enough to compensate for the slowing home buying trend and the recent CEO Vishal Garg controversy, where he fired 9% of the workforce via Zoom. That still stings.

The question remains if Better.com goes through its expected IPO, it is the best house on the street or a money pit.

What does Better have going for it?

Better has grown from nothing to a nearly $8 billion company in 5 years. The question is if they can continue to keep this up. Better, backed by SoftBank, announced in May 2021 its intention to go public via a special acquisition company (SPAC) named Aurora Acquisition. Their intended date was the end of 2021, but that has been put off, and no new date has been announced.

In 2020, Better’s loan value climbed over $24 billion, which was a 490% increase, business insurance had grown 855%, and real estate transactions were up 471% over the prior year. Better’s labour force costs half and produces twice as much as its competitors, and it has SoftBank, Ally, and others backing them.

These results continued into 2021, but 2022 indicates a slowing trend.

The take-out of an online mortgage path seems successful in a field that is known for fees and difficulty. Better’s website is simple, with no broker commission, origination fees, and preapproval in minutes. This pathway is popular with those aged 22-40, who, according to the National Association of Realtors, make up the most significant portion (37%) of the market. Better’s timing could not have been better, with rates dropping from 3.47% in October 2016 to 2.74% at the start of 2021 through the end of the year, which resulted in many riffs that took advantage of these meagre rates. Buyers were also jumping in paying less for borrowed money, causing the Department of Housing’s average home price to jump nearly $100K to $405K in five years.

What challenges does Better.com face?

Better has been successful during a hot market, but will this continue as rates climb and the housing market slows? It appears to have already started. In April 2022, a 30-year fixed rate mortgage jumped to 5.358%, up from 3.11% on Jan 1st. The continued high inflation numbers and the Fed’s interest rate hikes are causing concern in the bond markets, which have ties via treasury notes to mortgage rates.

The shortage of construction workers and supply chain issues have slowed new home starts, driving up existing home demand, and there will be a point where prices become too high and unaffordable for new buyers.

Better’s competitor, Rocket Mortgage, is the largest mortgage originator and had a massive 2020 IPO but has fallen 61% in the past year.

Many analysts still have a bullish view of Rocket for the future. Will Better follow a similar trend? The mortgage business is cyclical; having a strong position and an offering that fits consumer behaviour may be enough to see it through dark times.

Is a Better.com IPO a good investment?

The competitive nature of the mortgage industry makes an investment a tough decision. Rocket can increase its efficiency and reduce its costs, undercutting the advantage of Better. Better cannot generate the leads of a too-big-to-fail bank (Chase, BoA, Wells Fargo) with their millions of customers.

Better’s growth story and strategic vision has been undercut by the reports of a toxic work environment, fraud allegations, and the Zoom lay-offs. The CEO, Vishal Garg, did take a little time off to reflect on leadership, and the SPAC company Acquisition Corp. said it remains confident in Garg. If we look at Rocket’s performance, even in a hot home market environment, there remains a risk of buying into a company in the middle of a housing downturn. A wise investor may consider waiting for a housing bottom before a Better.com buy.

What will Starlink’s valuation be at its IPO?
April 2, 2022
How To Hold Private Equities in Your Portfolio
September 28, 2022
What is the growth outlook for Impossible Foods?
June 27, 2022
What is in Bill Gates’ Investment Portfolio?
September 11, 2022
Will Kinder Ferrero survive the salmonella scandal?
May 5, 2022
Why is AGL share price falling?
May 11, 2022